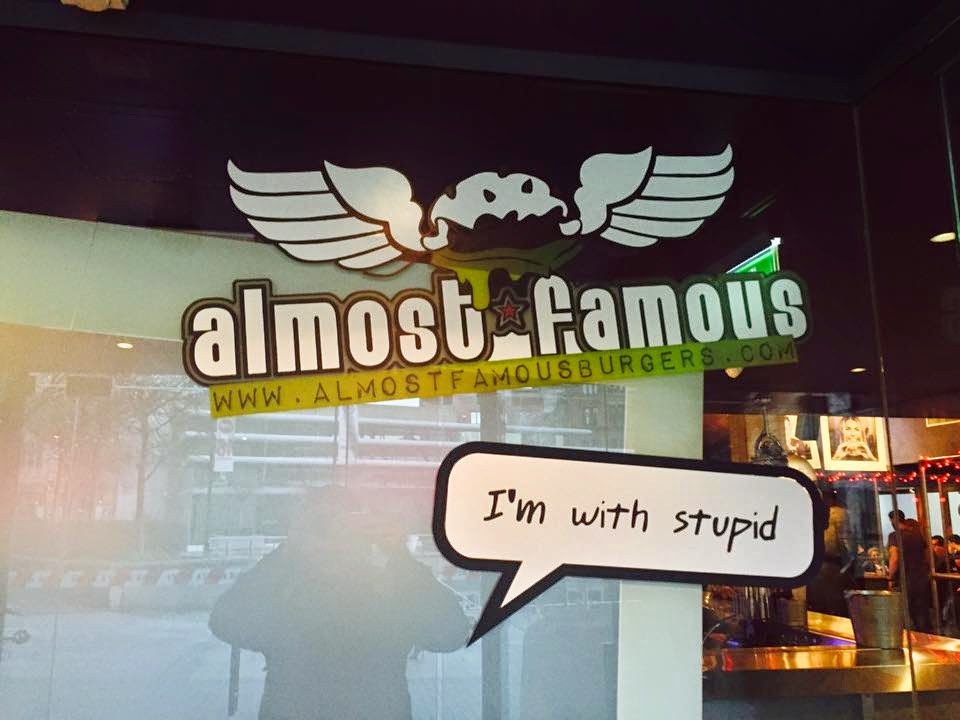 In fact, for the last few years it has been the number one recommended place to eat by friends and colleagues.

When I had a birthday meal last year at Solita, most of my friends had suggested Almost Famous as their favourite place.

When we went to Red's True BBQ for a midweek meal, three different people declared that if I thought that was good, I would be blown away by Almost Famous.

Finally, this week, I had a colleague say that 'you can't call yourself a burger lover unless you have tried Almost Famous'.

My expectations were well and truly set, but let me now set your expectations for the blog post you are reading:

You're not going to like everything I have to say. 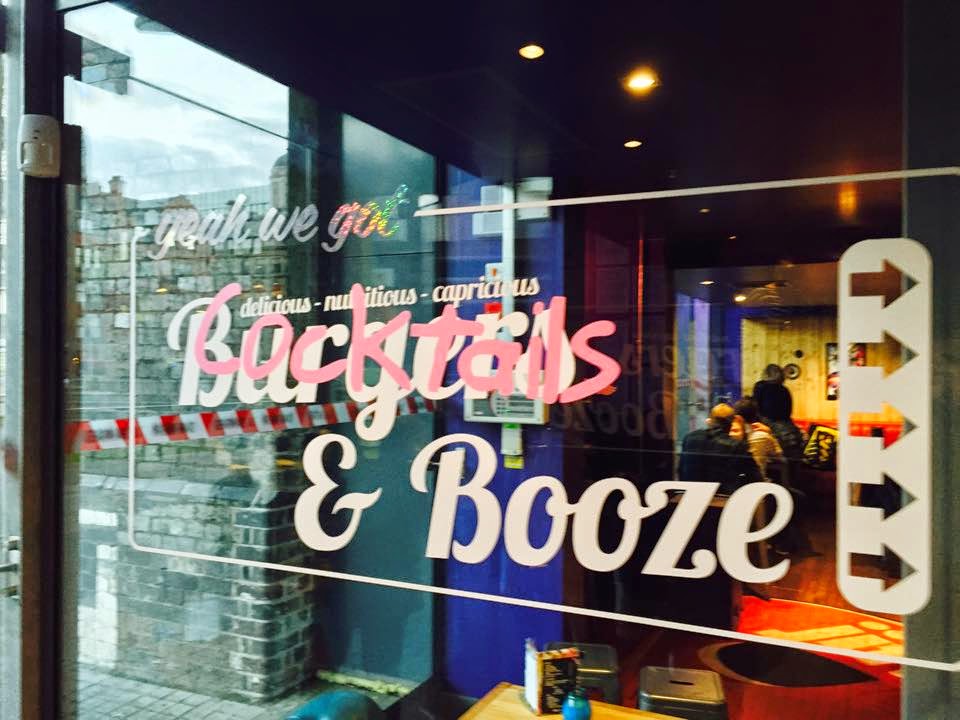 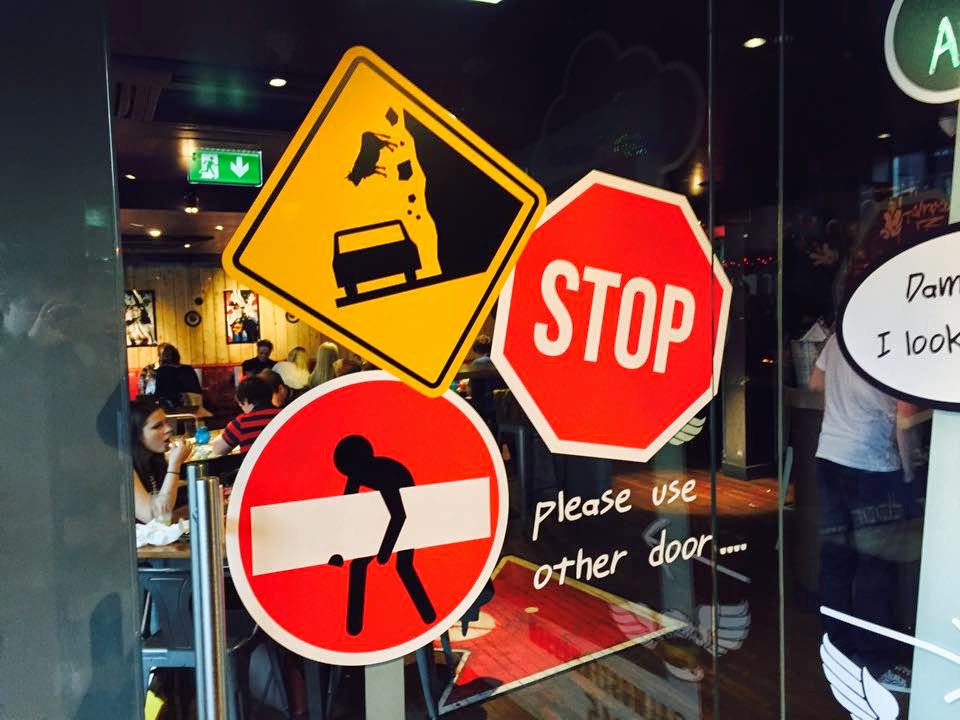 Hannah and I were due to catch a train from Manchester Piccadilly last Friday night, ready to begin our weekend adventure to London.

We had a couple of hours spare to have some food so what better opportunity to finally give in and try Almost Famous in The Great Northern. 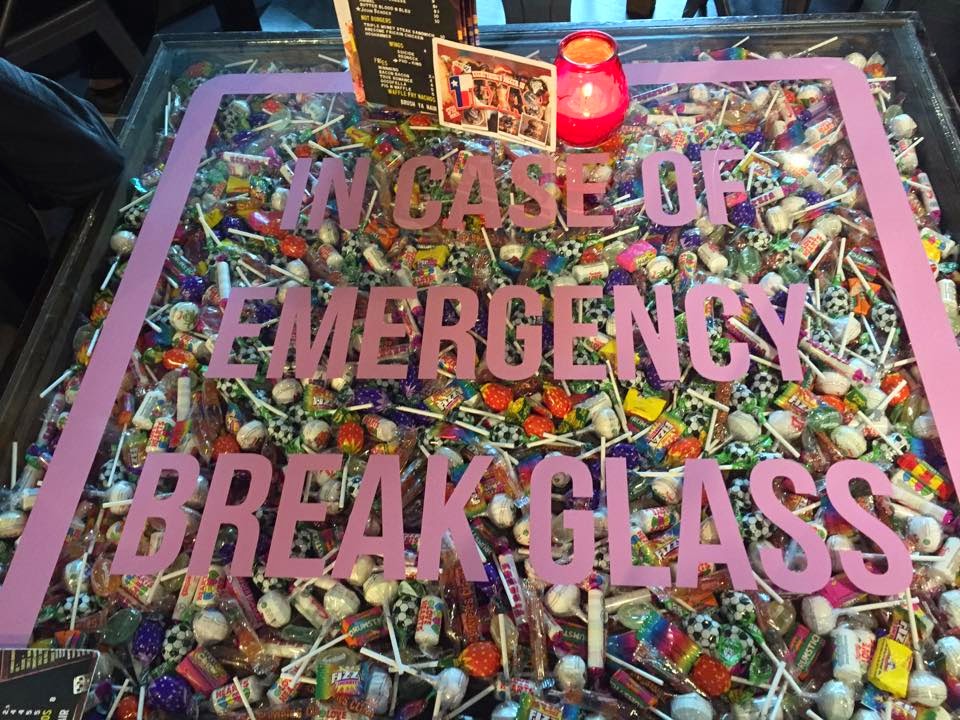 The new restaurant, opened in 2013, is right next to the Manchester 235 casino and the All Star Lanes restaurant/bowling alley.  There are so many great places to eat and drink at this end of Manchester, making it my favourite part of the city.

There was no one there to greet us upon entering Almost Famous but I approached the bar and we were told to take our pick of tables.  This was not a difficult decision as my wife directed us to an amazing table that had been filled with sweets!

The menu is my kind of heaven, filled with spectacular burger combinations and funky cocktails - I could have eaten everything on offer. 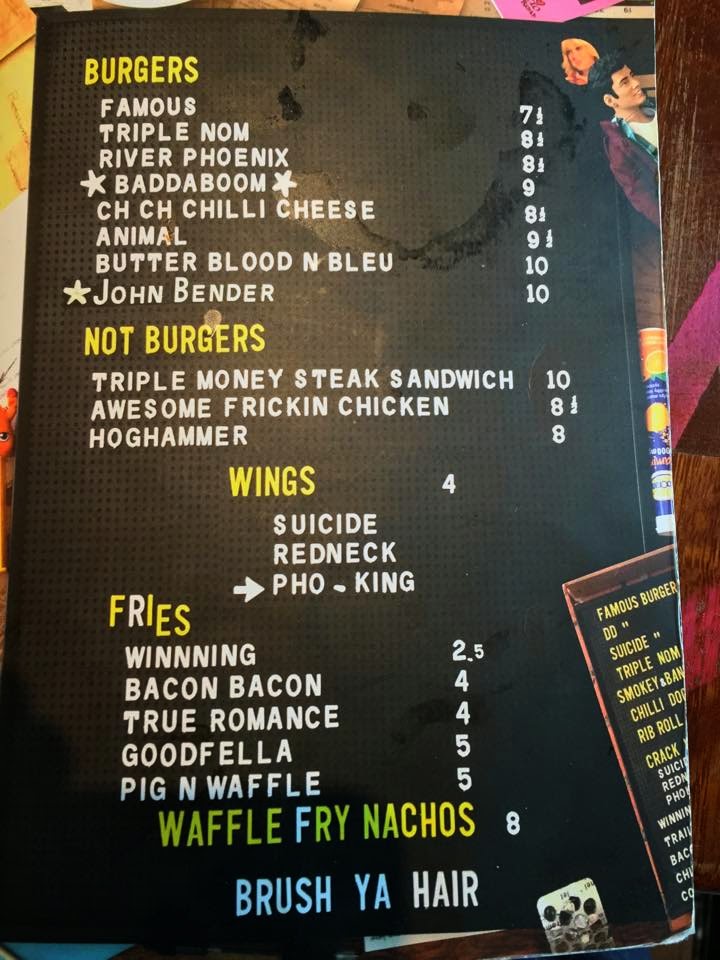 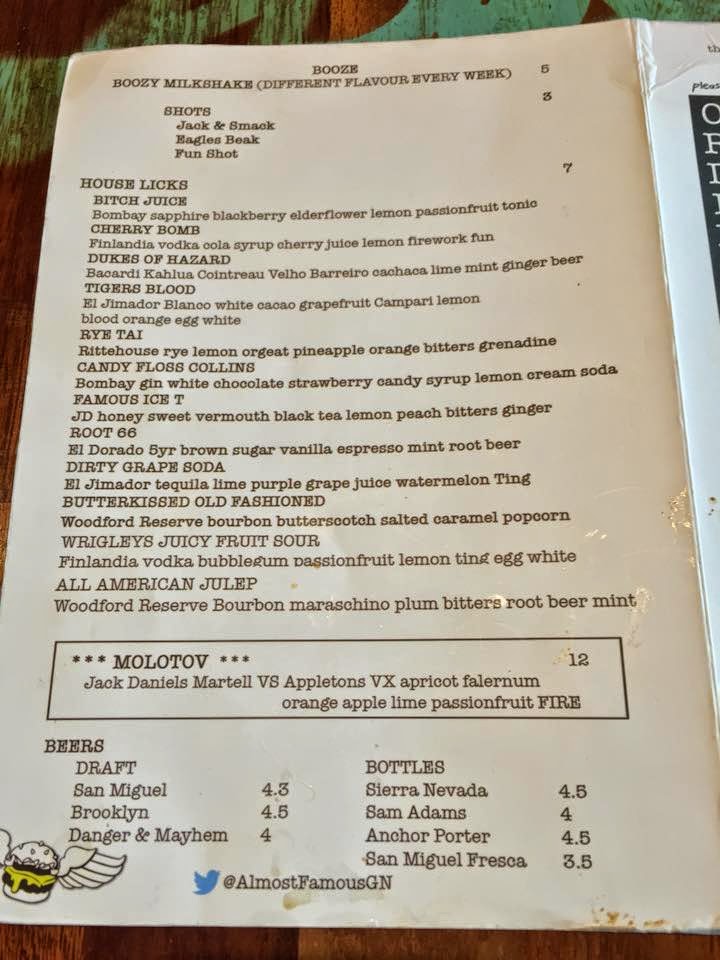 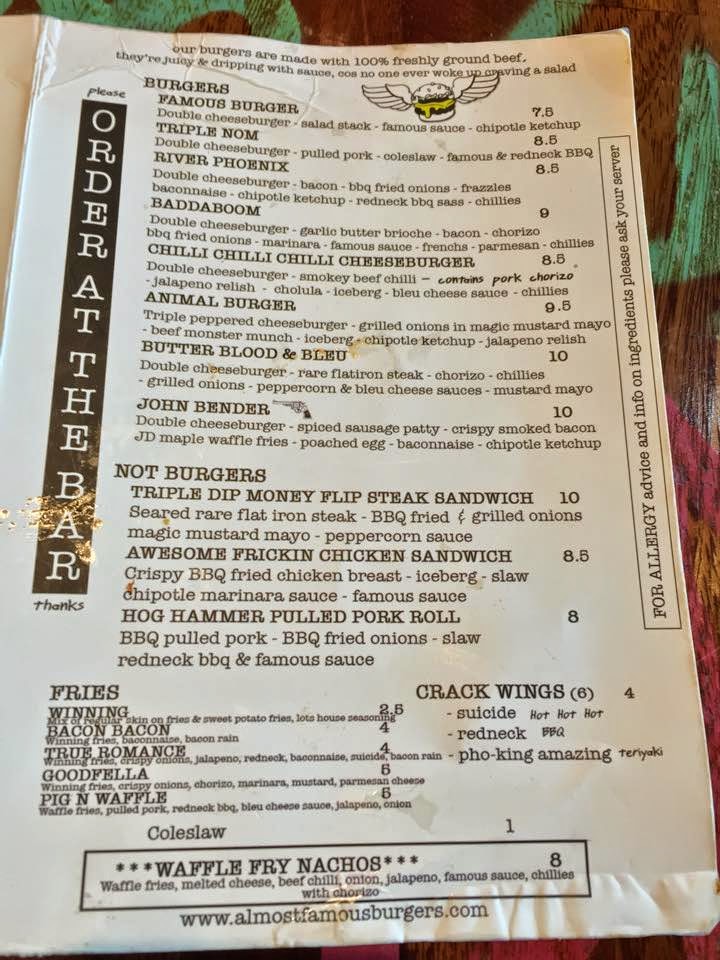 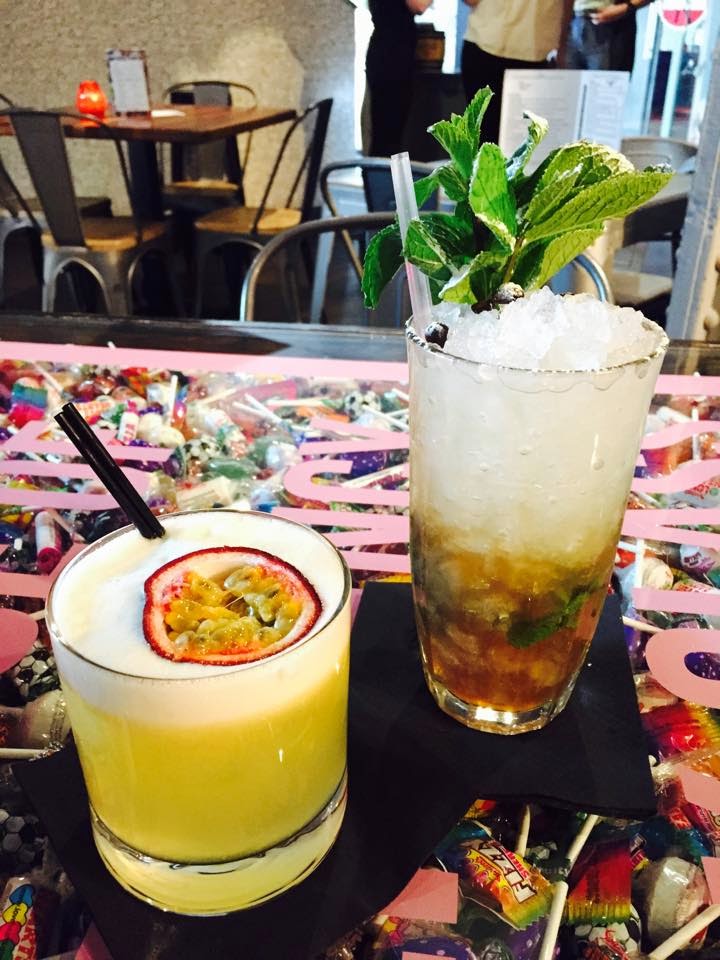 Wrigley's Juicy Fruit Sour & Root 66
Both concoctions were spot on but the Fruit Sour drink won out as we both ordered this for our second round. 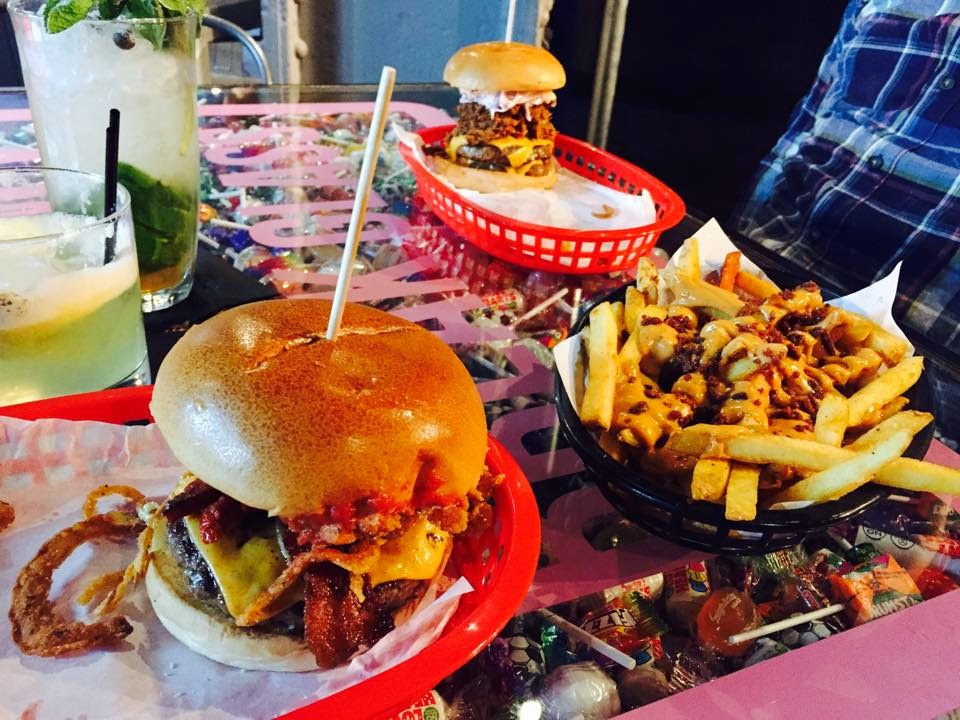 It was scrumptious with the addition of chorizo which gave it a Spanish twist. 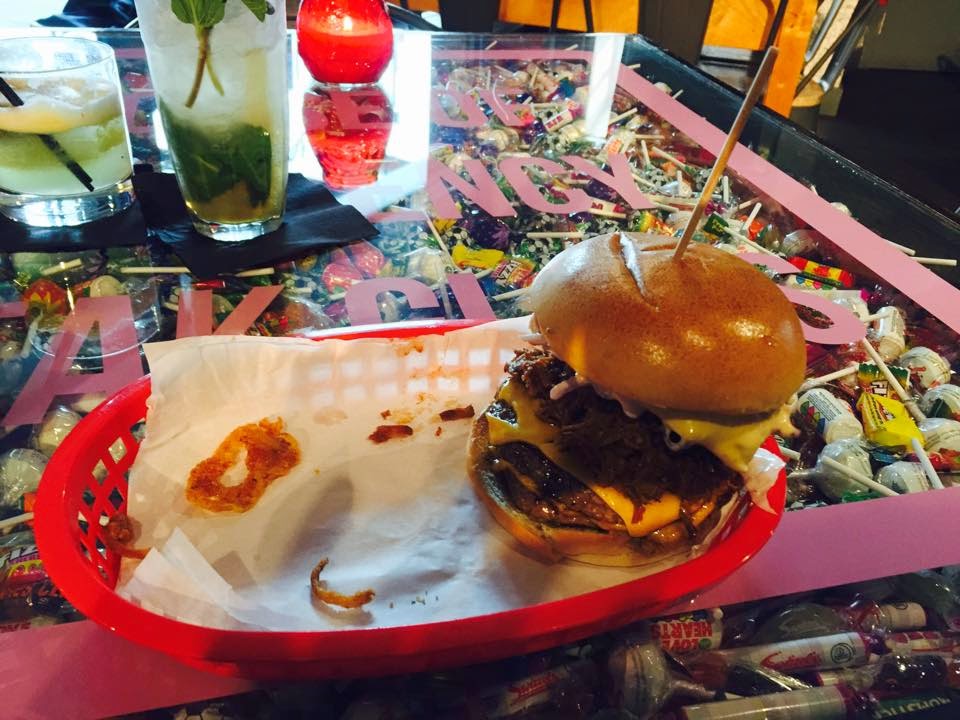 Triple Nom
My selection was also a double cheeseburger but with pulled pork, coleslaw and famous & redneck BBQ.

The first bite is forever memorable with the perfectly seasoned patty and juicy pulled pork.  The burger itself tastes very much like a McDonald's cheeseburger only better... much better. 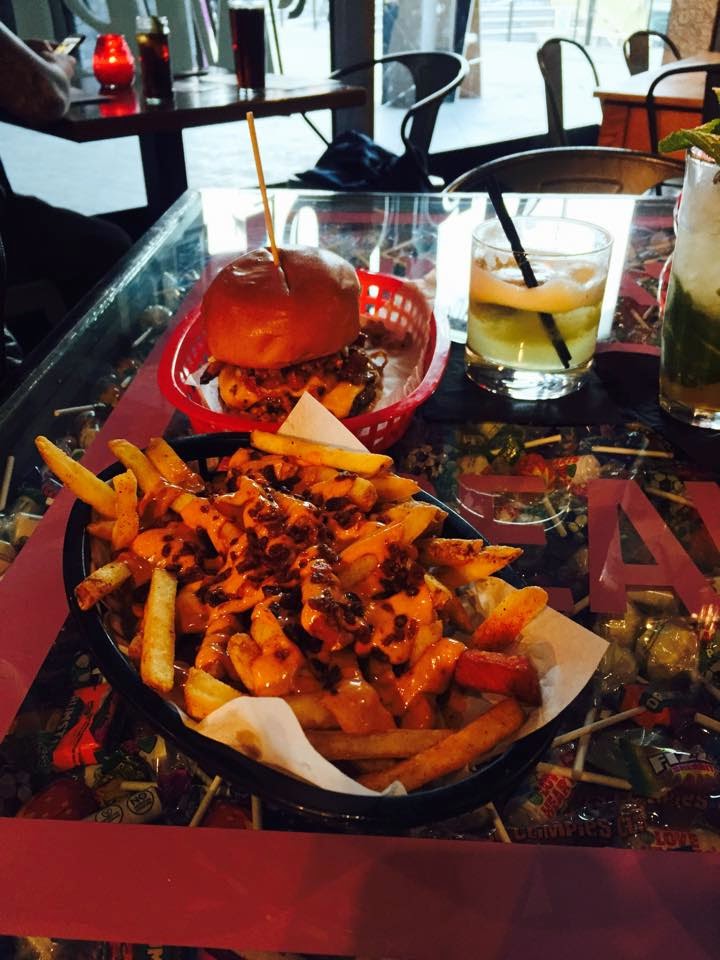 Bacon Bacon
At Almost Famous, you order your sides separately so we decided to share a portion of the Bacon Bacon fries.

Regular skin on fries and sweet potato fries are mixed together and covered in baconnaise and bacon rain (crispy bacon bits).

I love what they do to potatoes here - simply genius. 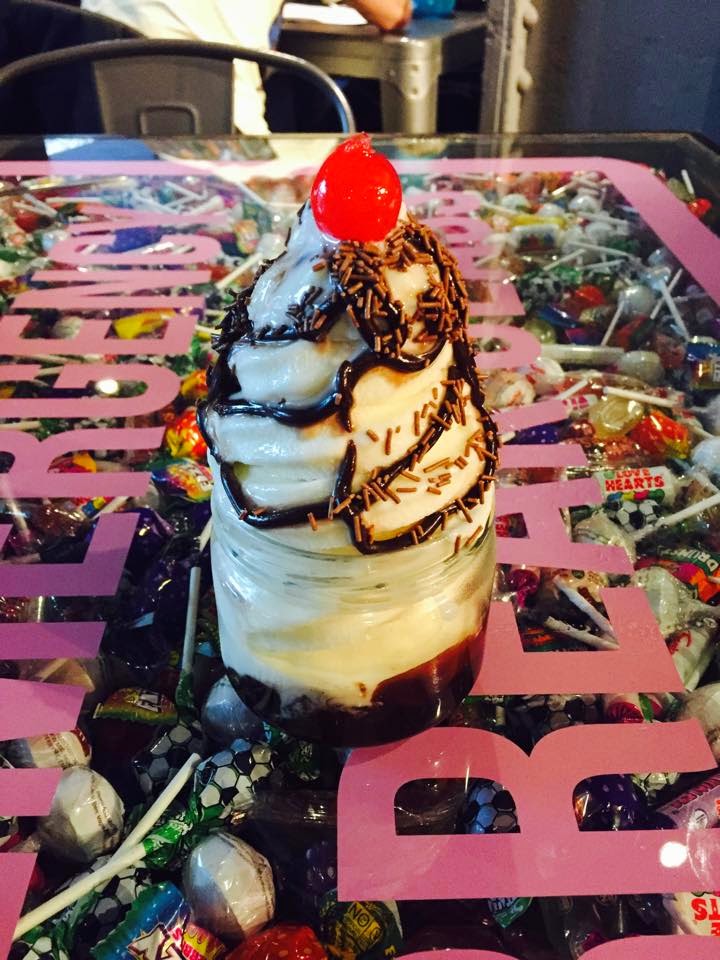 Chocciwoccihoohaa
We had room for something sweet after our delicious mains and Hannah was naturally drawn to the chocolate dish on the menu.

This 'I Scream Sundae' was served with chocolate brownie pieces and whippy ice cream topped with whipped cream, nuts and chocolate fudge sauce.

Just enough to leave us satisfied. 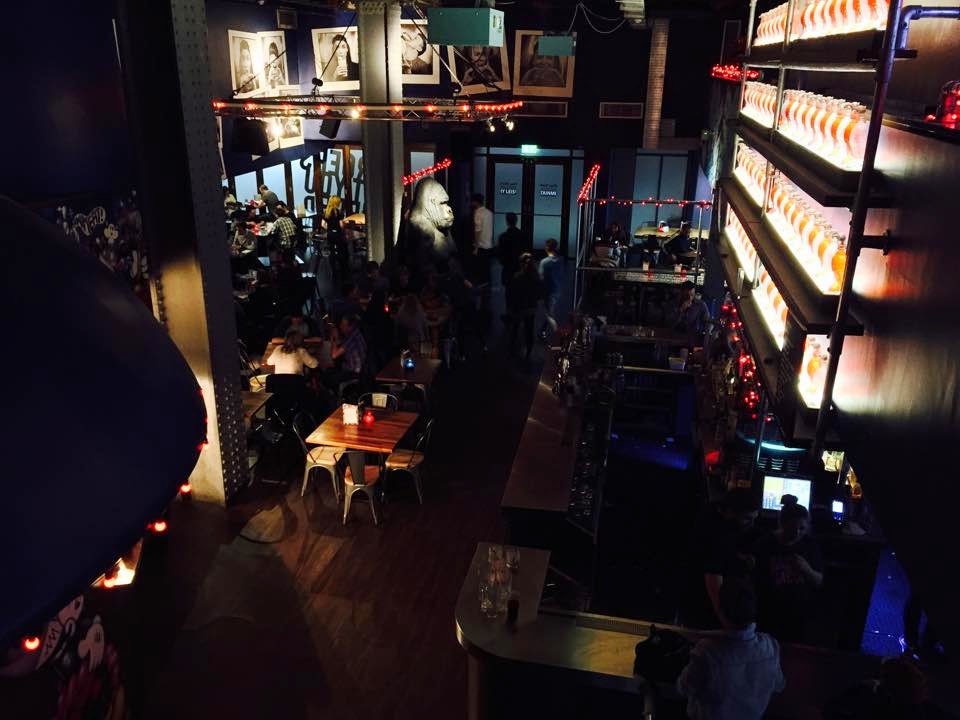 The food is great.  It compares well with other restaurants I love such as nearby Red's True BBQ and The Farmer's Arms in Bolton but I wouldn't say it was in a league of its own.

However, our experience was not 100% perfect.

In fact, I would go as far as saying that I wouldn't go back to the Great Northern branch of Almost Famous. 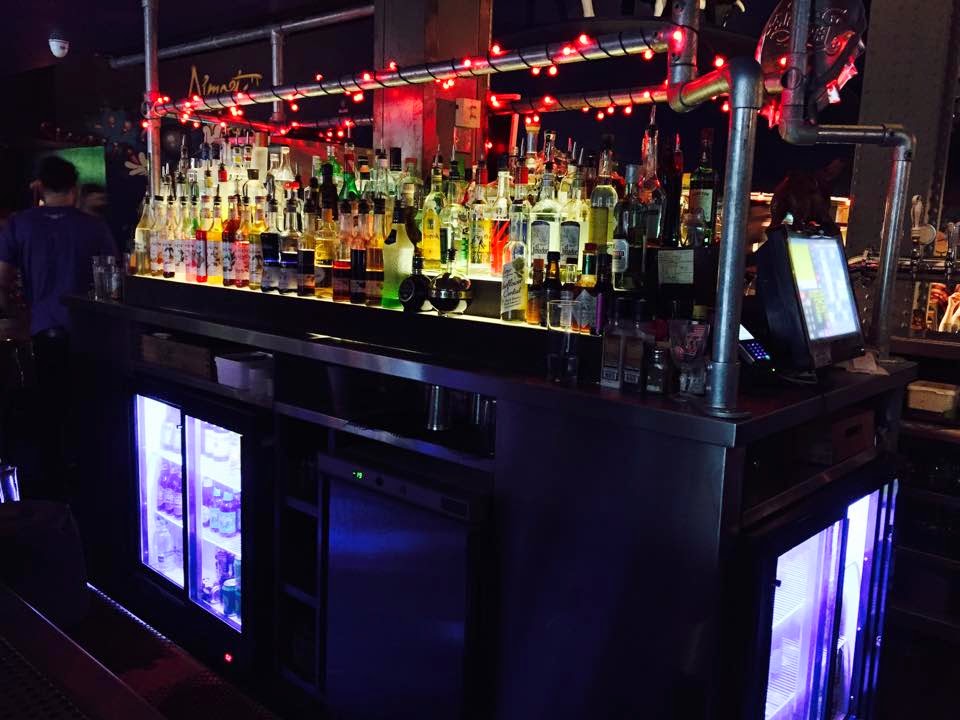 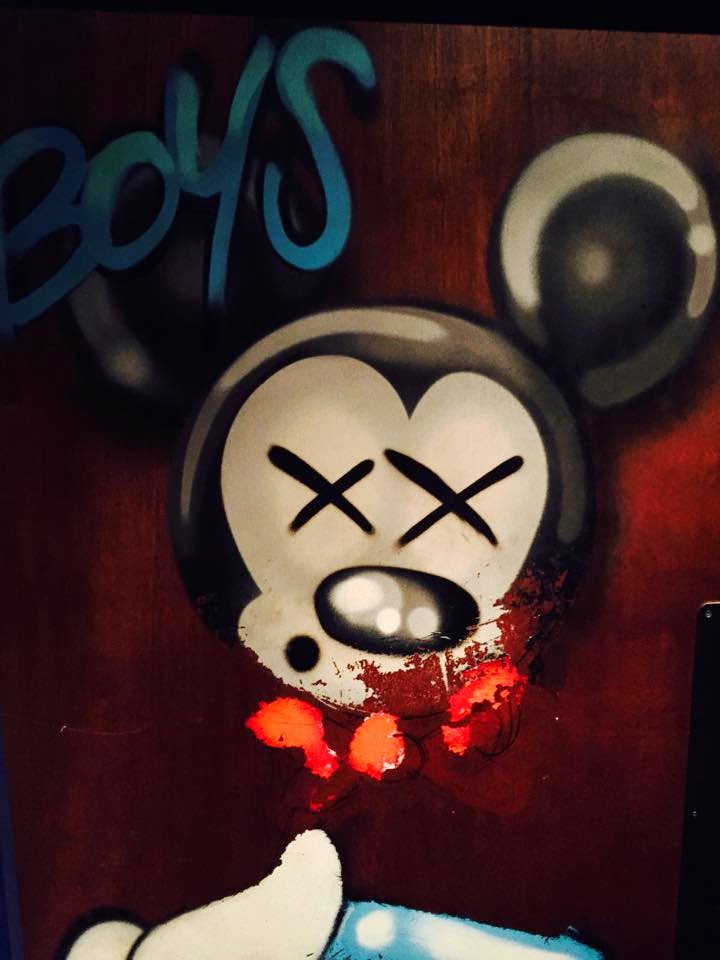 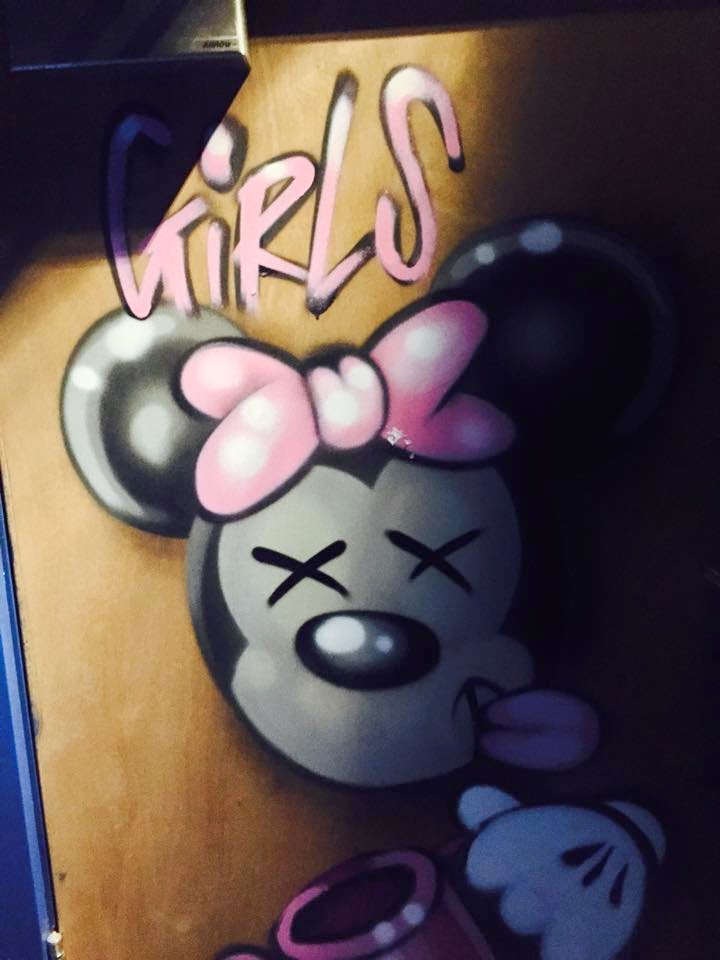 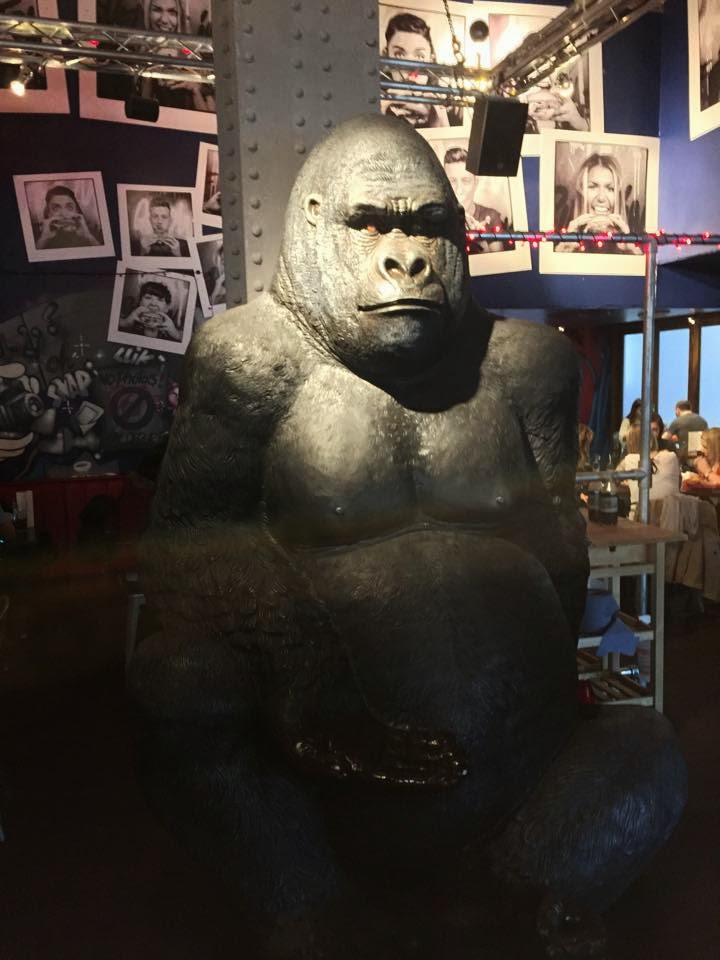 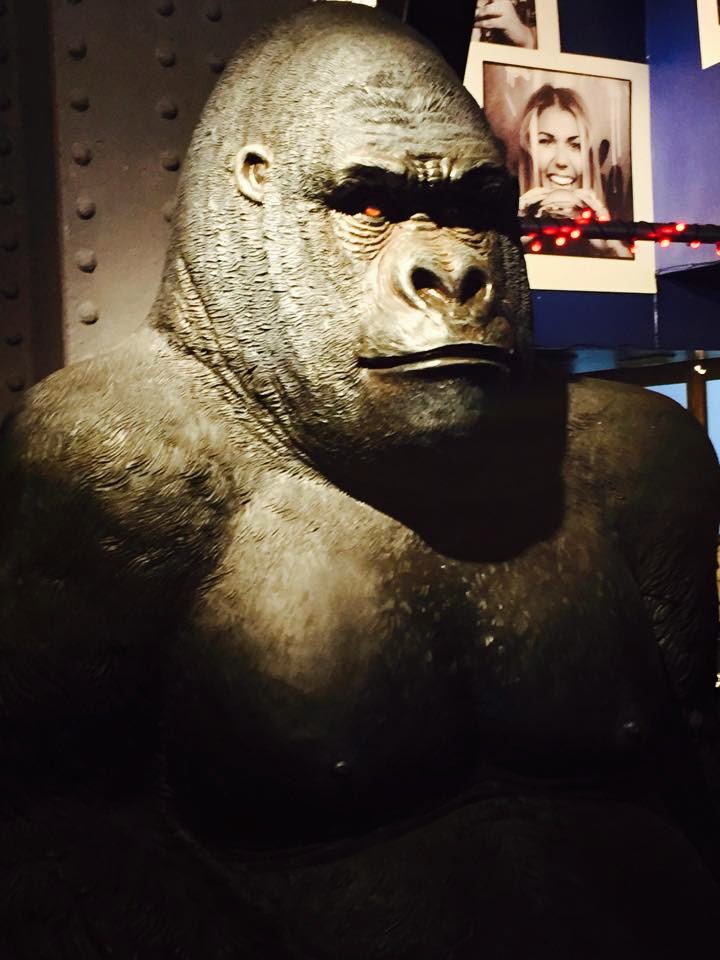 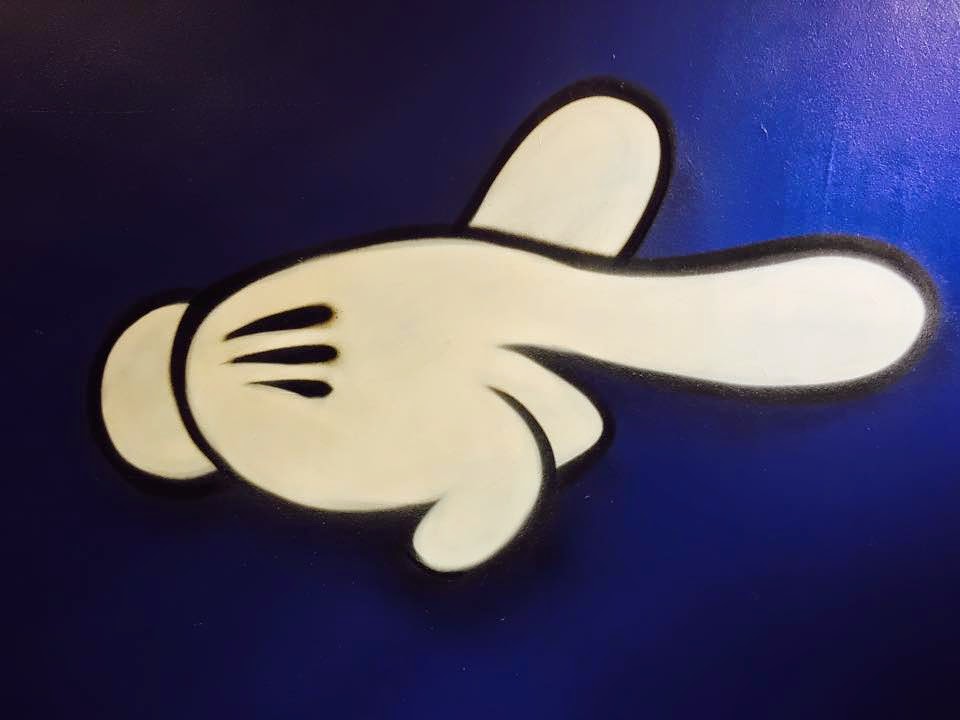 Hannah made an interesting comment during our meal last Friday.  She said that it felt like our generation had grown up and was starting to open restaurants that try and evoke memories of our time at university.

This is exactly how I feel about Almost Famous in The Great Northern.
It is like sitting and having a meal in the university nightclub whilst indie disco plays loudly in the background and the lights are too low to really see what you are eating.

University was a brilliant time but I am now 28 (nearly 29) and as much as I loved the dingy union dance floor back in the day, I have moved past it now.  What I want is a bright environment where the music isn't so loud that I have to shout just to talk to my wife.

Add to that the staff who were difficult to get hold of and a little rude.  They milled around in groups discussing their plans for the weekend when it would be better if they engaged the customers to explain, amongst other things, where the cutlery is.  I didn't really understand why everyone around us had an allocated waiter/waitress to serve them but we had to get up and find someone.

Back at uni, someone in the know would tell you about this "super cool" bar and everyone would immediately nod and agree about how great it is.  I kind of get the impression that this happened with Almost Famous and no one really wants to admit that we don't think it is quite as cool as everyone says it is.

Perhaps I'm just being a grouch in my old age but I found the whole experience very annoying. 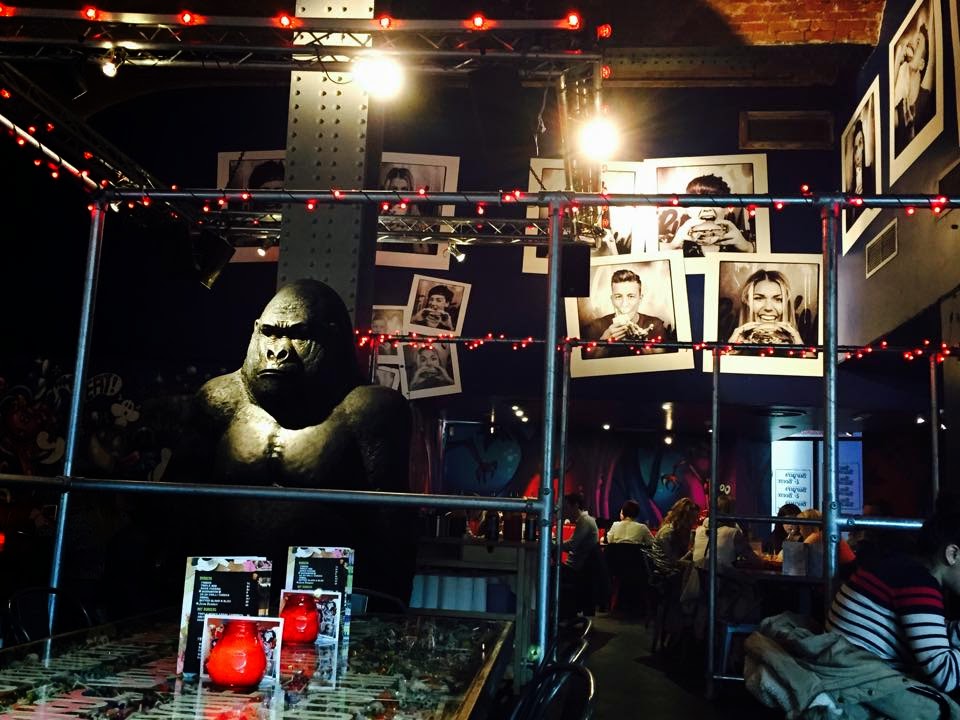 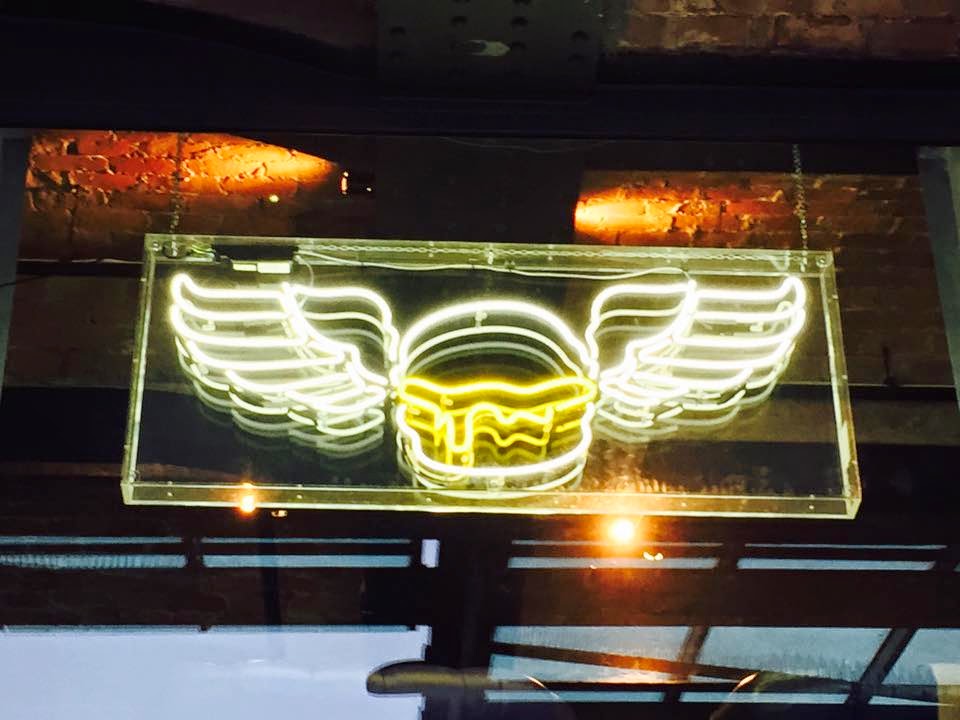